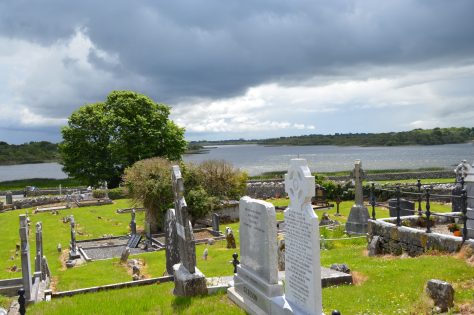 My interest in Fenloe Church and Graveyard comes from the fact that it is the final resting place of many generations of Newmarket on Fergus people including my family. And that is why I chose this subject as my project research for the ‘Reading Your Local Landscape’ training course. No doubt you will agree the location is very picturesque overlooking Finlough Lake.

What’s in a name?

Fenloe, Finlough, Tomfinlough and Tuamfinlough are all variations of the place name. It derives from the Irish, Tuaim-Fionnlocha i.e. Tomb or Tumulus of the Fair Lake. Apart from its natural scenic beauty, Fenloe has its own Saint, Folklore, Holy Well, Cures and Traditions making it a place well worth a visit. 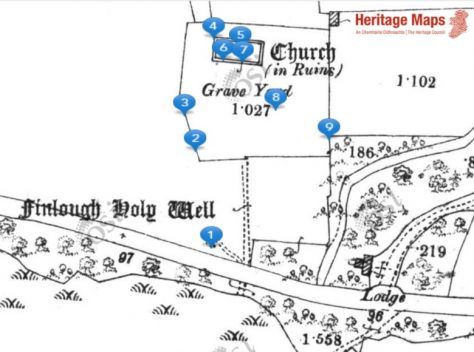 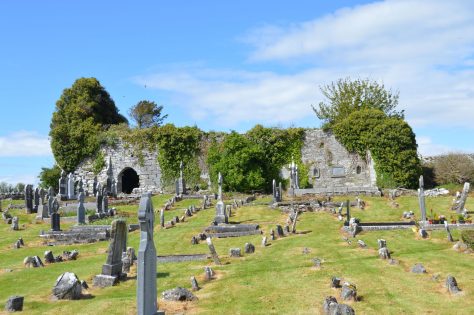 Fenloe or Tomfinlough was founded as a monastic settlement over 1,500 years ago.  It is one of seven ancient civil parishes, the others being Bunratty, Clonloghan, Drumline, Kilconry, Kilmaleery, Kilnasoolagh that were united to create the present day Roman Catholic Parish of Newmarket on Fergus. Fenloe is mentioned in the Annals of the Four Masters: – A.D. 944, Scannlan Abbot of Tuaim Fionnlocha, died. The official seal of the parish of Newmarket-on-Fergus is “Septem Ecclesiae”, the seven churches.

One of our own with a tongue twister name

Saint Luchtighearn (pronounced, Luk-ta-gern or Luk-tigh-ern), was a native Irish saint who lived about 1,500 years ago.  He is believed to have been the first abbot of Fenloe and is remembered locally for his cures for skin ailments. His Feast Day is the 28 April.

Pádraig Ó Riaín, in his book A Dictionary of Irish Saints, states that Luchtighearn is said to have belonged to the Tradraighe (Tradaree) whose tribal territories covered about the same area as the Barony of Bunratty. He had royal connections through his mother, Brígh, to the King of West Munster.

Imagine for a moment that there was no vaccine for Covid 19. How would you feel? Probably hopeless. Do you believe in a lucky charm or maybe pray to a saint when you need a favour? Faith plays a big part in people’s lives and it was even more so in the time of our ancestors. That’s why the protection of sacred places and objects was important, it’s something to hold on to, something to believe in. It’s hope. And hope springs eternal.

The monastic site at Fenloe and an area immediately around is believed to be protected from the ravages of plague. A Holy Well is located at the entrance to the graveyard. An inscription informs us that the well house was restored in 1959 by two local men, Michael Mc Inerney and Ala Conlon.

A Bullaun Stone is recorded at this Holy Well by the National Monuments Service. These bowl shaped stones are often associated with early Irish monastic sites but this particular ‘bowl’ appears to be of a more recent date.

Fenloe Holy Well is associated with “Special Rounds.” This involves blessing yourself with water from the well, then following a special circuit around the graveyard, saying prayers at set locations. The rounds must be done on nine consecutive mornings. It is claimed that those who do the “Special Rounds” with belief in the power of Saint Luchtighearn and Fenloe, will obtain cures from various illnesses. 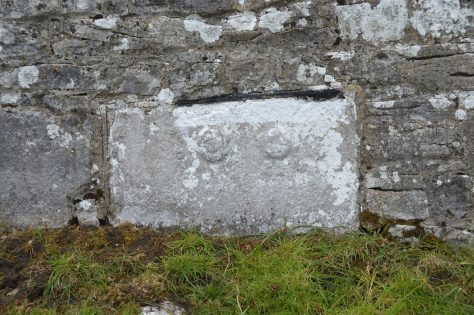 The Plague Stone or Curing Stone located on the outside of the graveyard’s western boundary wall is associated with a cure.  On the face of the stone are two raised circular shapes, one incised with a simple cross.

John O’Donovan’s Ordnance Survey Letters of 1839 tells the following story of the origin of the stone.

Long ago a plague infected the population with many people dying. Large lumps or boils appeared on the head of the sick for which there was no cure or medical skill or treatment. News of the plague reached the priest at Fenloe, he asked that the first person to get the plague in the area should come to him immediately. Soon after, while the priest and others were working in a meadow, a woman came running towards them declaring that she had the plague and to stay away from her.

She pointed to two large lumps on her head. The priest instantly pulled off both lumps and dashed them against the stone. One of them broke. Both lumps are represented on the Plague Stone. The woman was cured immediately and set off about her business after thanking the good Priest. The stone on which the miracle was performed was from then on called “The Plague Stone”. On that occasion the plague did not come within two miles of Tomfinlough.

Three Stone Heads   A Case of …. Believe it or not 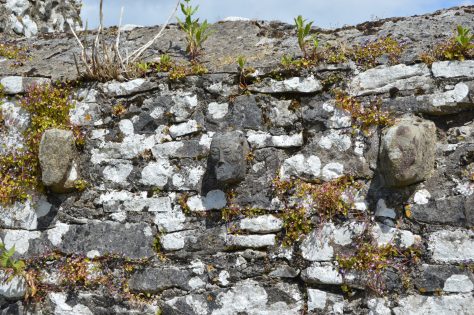 The story continues and explains the presence of three carved heads which are located on the graveyard east boundary wall.

Three young men who witnessed the woman being cured of the plague were asked if they believed the cure was a miracle. The first believed fully in the miracle, the second was not as convinced and the third laughed and said the he did not believe.

The man who asked the question said that time would be their judge.

The three carved stone heads represent the three men. Two are badly weathered, while the features of the third are still visible. The story tells us that two of the three heads must suffer the everlasting humiliation of losing face due to their lack of belief in the miracle they had witnessed, while the head of the believer would be unaffected by time or weather. A tradition that always attracts comment from non-local mourners is the route taken by the funeral procession. On arrival at Fenloe the funeral cortege enters the field in front of the graveyard. The coffin is taken from the hearse and carried shoulder high by family, friends and neighbours. The procession enters the adjacent field making its way along the outside of the graveyard’s western boundary wall, passing the Plague Stone and on to the Coffin Rest Stone.

The coffin enters the graveyard at this point. From here the coffin is taken towards the western gable of the church and then on to the grave for burial.

On route the coffin is lowered to touch blessed ground near a tree, now marked by a tree stump. During a time when the dead were buried in cloth or sacks, some people believe that this was done to lure wild animals into digging in the wrong place.

The tradition may vary depending on families, however, this is the practice as I know it.

The custom of entry to the graveyard in this manner may have its origins in a time when Catholic funerals had to seek permission for burials or remain outside the gates of the graveyard with the coffin resting on the stone pending the payment of a fee.

Canon Reuben Butler and Máire Ní Ghruagáin in their book The Story of Newmarket-on-Fergus are of the opinion that the practice of going over the wall resulted from Catholic priests not wishing to seek permission of the local Protestant clergy who held the key.

Find the clues and discover the history 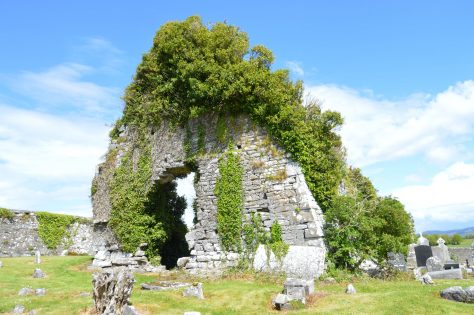 You won’t find traces of the first church built in Fenloe which was very likely a “Dairteach” or wooden church, but there is a clue. Look around and you’ll see good land with deep soil, perfect for oak and ash forests, just the material used to build the early churches 1,500 years ago.

The present day stone church ruin shows evidence of construction and restoration over three different periods. The church is rectangular in shape with the Altar area on the eastern side.

The original door was located on the western gable. Here you will see “Putlogs” holes.  Timber posts were inserted into these holes to make a scaffolding platform while the building was under construction 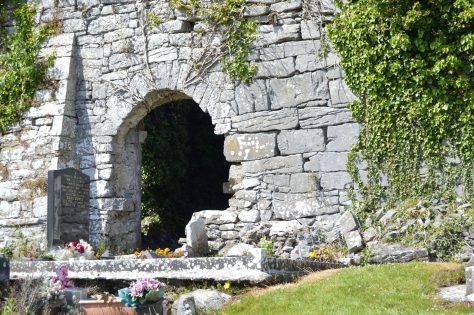 Cyclopean Masonry near the south door

The first stone church in Fenloe was built using “cyclopean masonry” i.e. huge limestone blocks. This method of building was in use about 1,000 years ago. You can see examples in the lower section of the south wall 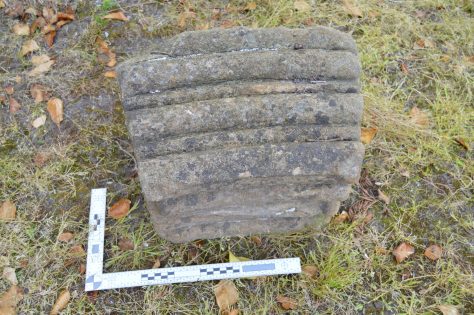 Section of carved sandstone possibly from a window arch

The next stage of construction and redesign was carried out about 750 years ago by the Anglo-Norman de Clare family. They introduced continental architecture to Fenloe in the form of ornate carved sandstone stonework. This stonework can still be seen around window openings in the south wall, the altar area and discarded on the Church floor.

The final stage of church building improvements around the east gable area happened about 500 hundred years ago.  Sadly, the east gable is now collapsed.

The Penal Laws introduced 325 years ago heralded the end for Fenloe as a parish church. In a letter dated the 2 May 1744, the High Sheriff for Clare, John Westropp informed the Secretary at Dublin Castle

“… according to your instructions …and had the army from Clarecastle to assist … We have locked and nailed up all the Mass houses”. A plaque in the east end of the south wall of the church is inscribed: “This is the burial place of John McNamara Waverly House who repaired wall and buttress of this old church”. The repair work was carried out sometime during the nineteenth century. 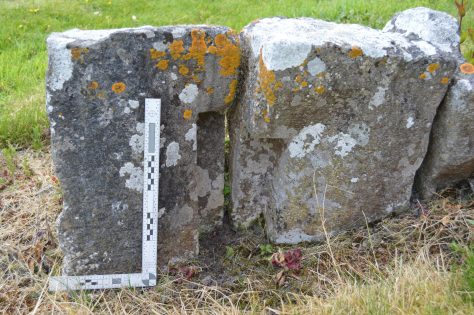 After this Fenloe Church fell into disrepair and ruin. The north wall fell during a thunder storm on 22 July 1907. The east gable fell on 10 January 2007. 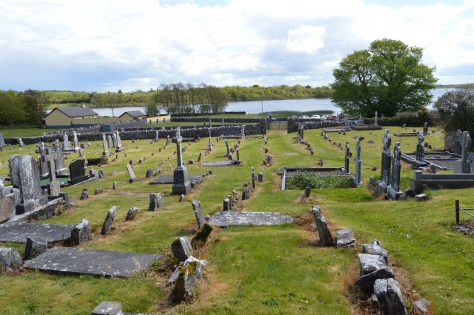 The headstones in the graveyard are set out in neat rows that run north to south. As with all Christian burials they face the rising sun waiting for the last day when all the dead will be resurrected.

Recorded burials date back to 1746. The gravestone inscriptions were recorded in the late 1990’s and can be viewed on the following link, https://www.clarelibrary.ie/eolas/coclare/genealogy/don_tran/graves/fenloe_graveyard.htm

Fenloe graveyard was extended when additional land was acquired in 1994 and is still in use. Dawn Mass is celebrated here every Easter.

I’m sure you will agree that Fenloe is not only a place of outstanding scenic beauty, it is also a very interesting historical site where we can trace 1500 years of our history.

If you decide to visit Fenloe, a word of caution. The remaining walls of the Church are obviously quite fragile and visitors to the graveyard should be careful and keep clear of possible future collapses.

I’m not an expert, however, I was fortunate to benefit from the expert knowledge of Zena Hoctor who gave a 20 week Heritage Course on Reading Your Local Landscape which covered areas such as geology, bio-diversity, archaeology and natural heritage in South East Clare. The course was supported by Limerick and Clare Education and Training Board and co funded by the County Clare Creative Ireland Strategy.

All photographs were taken by the author.

A sincere thanks to all those I had the good fortune to meet while researching Fenloe Church and Graveyard and who gave generously of their time and knowledge.

Sources consulted while researching this article and References for further reading.

If you would like to discover more about Fenloe and Saint Luchtighearn plus much more, here is a link to the Clare County Library website: https://www.clarelibrary.ie/eolas/coclare/archaeology/index.htm