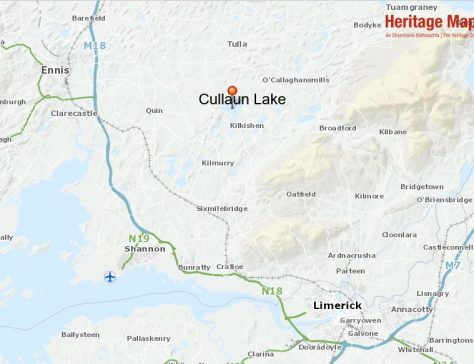 Location map for Cullaun Lake. Dats from the basemaps gallery accessed through heritagemaps.ie 29-6-2021

Cullaun Lake is situated in East Clare which is often referred to as the Lake district of the West of Ireland with its extensive lakes and rivers. Within 10 km radius of the village of Kilkishen there are up to 20 lakes of various sizes but the most popular lake for recreation purposes is Cullaun Lake also known as Lough Cullaunyheeda.  It used to be known locally as the “Spa” Lake. It is situated 1 km north east of Kilkishen village and can be accessed from the Kilkishen to Tulla road (R462).

There are three interesting aspects to the Lake as follows: 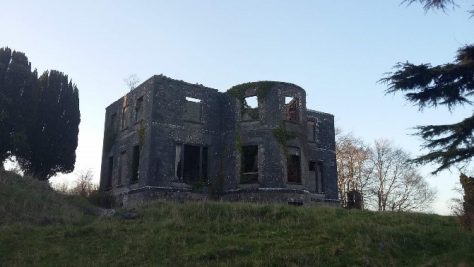 A house built on the shore of Lake Cullaun in the 1780s, was the home of Thomas Steele and in 1821 it passed to his nephew “Honest Tom” Steele, a friend of Daniel O’Connell. In turn, in the late 1840s, the Cullaun Estate was inherited by Tom Steele’s niece who had married Charles Studdert of Newmarket House. Their son Robert Wogan Studdert continued to live in the house and it remained in Studdert hands until 1954 when it was taken over by the Land Commission.  Today unfortunately it is in ruin. The Studdert name was very prominent in Co Clare and Co Limerick in the 19th century, where they had up to sixteen houses and thousands of acres of land. Kilkishen House belonged to the family.

“Honest Tom” Steel was born locally in Derrymore in 1788. He was educated in Trinity College, Dublin, he then moved to Trinity College Cambridge where he completed his studies and obtained a degree of Master of Arts.

When he moved back to Ireland he inherited Cullaun House and property in 1821.  Although a member of the Landed gentry of Clare, a Protestant and Loyalist, he showed sympathy with those suffering from oppression or injustice of any kind. He admired Daniel O’Connell and proposed him for election in Clare in the first round in the fight for the Catholic Emancipation Act.  He spent most of his remaining life mainly in politics and toured the country preaching peace and religious freedom. He met with bitter opposition from the bigoted press which was generally on the side of the Ascendency.

The strain of years of continuous agitation and political excitement left a mark on his sensitive nature and as he had a total disregard for the value of money, it led to financial ruin. He travelled to London and  seeking relief, he jumped into the Thames at Waterloo Bridge. He was rescued and conveyed to Peel’s Coffee House in Fleet Street where he died on to the 15th June 1848. His remains were conveyed to Dublin where his body was laid to rest in the O’Connell Circle, Glasnevin.

One of Tom Steel’s legacies was his restoration of Craggaunowen Castle. The ruined castle was then part of the Cullaun estate. He spent much of his time in the castle when he stayed locally.  It is said he preferred living in the castle than in his modern mansion by the lake. He built a gazebo on the hilltop east of the castle from which he viewed almost the entire county. The gazebo collapsed in the 1960’s and the site is marked by rubble stone today. 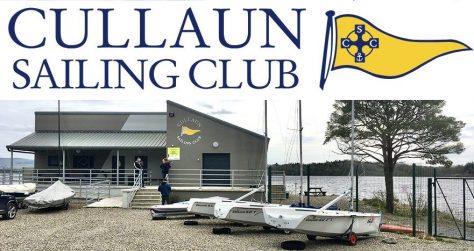 Cullaun Sailing Club is located close to the ruin of Cullaun House, two miles from the picturesque village of Kilkishen. The lake is 1.5 miles long and is an ideal, safe sailing location particularly for beginners.  It is within easy traveling distance from Limerick City (20 miles), Shannon Town (15 miles) and Ennis Town (12 miles).

The formation of Cullaun Sailing Club goes back to the late 1960’s.  It began as  ‘The Shannon Sailing Club’ sailing in the Shannon Estuary, but difficulties due to tide  levels led to a move to Ballyallia Lake near Ennis. The name  was changed to the Ennis Sailing Club in the early 70’s.  Later attempts were made at expanding the club membership and Inchiquin Lake near Corofin was in use as a base for a short time.  Unfortunately, swirling winds off the hills made it dangerous for sailing.

Several other lakes were looked at before finally deciding on Cullaun Lake. In 1980  sailing activities began from the lee shore off the Kilkishen road. However, this launch area proved to be too shallow and rocky.  In late 1980 an alternative site was identified, sailing from  the west shore. There was access by car to the edge of the lake, plenty of deep sheltered water but no beach which made it difficult to launch.

In 1981 the Club became formally known as the Cullaun Sailing Club and a constitution was drawn up. After several years of trailering boats to and from the lake, the club purchased and devloped the area of land that it calls home today.  President Hillary, a local man, was invited to open the new club facilities, which he did in 1983.

The Club continued its endeavour to build their own state of the art Clubhouse and finally a ‘Turning of the Sod’ ceremony took place in 2018 and the official opening of the clubhouse took place on April 27th 2019. 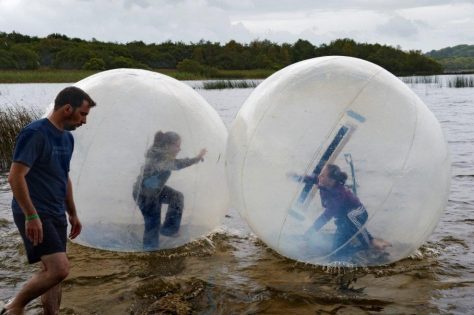 Before the majority of local people owned cars, and the trip to Lahinch or Kilkee was once every couple of years or so, Cullaun Lake, also known as the “Spa lake”, was the place to socialise or go for a swim in the evenings or on a Sunday.  In those days there was a narrow access to the lake shore from the road and in the 1960s a group of local young men got together and decided to build a concrete pier to the sandy area for bathing and swimming purposes.  The pier still exists today. 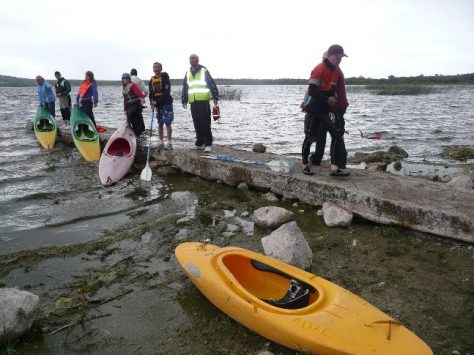 In 2001  Kilkishen Development Association was formed.  It was proposed that the lake shore be developed into a community park where the local people and visitors alike could enjoy this beautiful lake amenity. 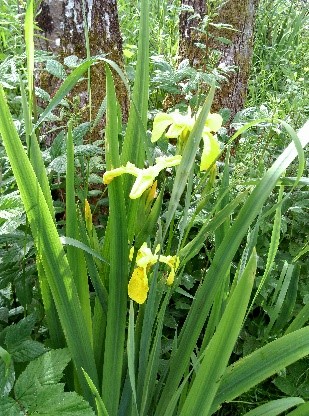 Work got under way and the local farmers who owned the commonage land kindly donated two acres to the community. A huge effort was made by the local community, clearing the scrub and laying out a car parking area. A plan was then put in place to generate funds to develop the grounds further. A grant was received from Clare County Council to develop  timber railing fencing, plant a section of native trees, lay gravel paths through the site and develop a picnic area. 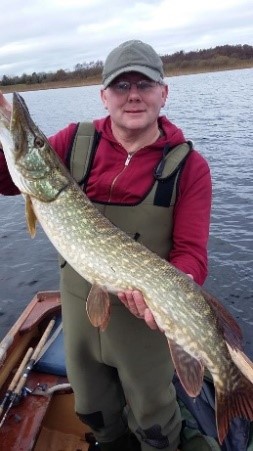 The Park and Lake is now a very popular amenity area for swimmers, anglers, weekend camping, canoeing, etc. It’s planned to develop the area further with planting of more native trees and lay more pathways for recreational purposes. A Biodiversity Plan is also being prepared by Kilkishen Development to further enhance the park.

“The Other Clare” for Cullaun House and Tom Steel

Brian Nolan for photos of Cullaun House and the fish catch