You are here: HomenextPlacesnextBuilt HeritagenextThe Evolution of Buildings in County Clare

The Evolution of Buildings in County Clare 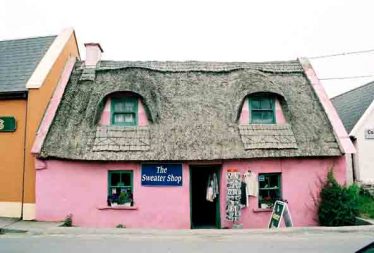 Since the recession of the ice cap some 10,000 years ago, County Clare has been inhabited by various peoples, each of whom have left their marks on the landscape, through agricultural practices, religious shrines, habitations and funerary monuments.

The earliest and most famous structure is probably Poll na Brón, portal tomb, near Ballyvaughan. Dating from c.5,500 years ago, it is visited by hundreds of thousands of tourists annually. The Neolithic and Bronze Age peoples also left us the numerous wedge tombs and cairns which covered the graves of their chiefs and are visible on the summits of hills and mountains throughout the county.

The Celts who invaded Ireland in the centuries before Christ constructed many stone and earthen forts of which almost 3,000 remain in County Clare. These were often built of large dry-stone blocks of rubble, fitted tightly together with the greatest of art and skill.

With the introduction of Christianity in the fifth century AD, came the technique of bedding stone in lime mortar. Some of our best examples of the mason’s skill are seen in the simple, undecorated churches and oratories of Tuamgraney, Ucht Mama and Teampal Crónaín in the Burren, where the building stones are so large that the style is often referred to as Cyclopean masonry.

The fashion of carving and highly illuminating such stone buildings came to a height in the eleventh and twelfth centuries with the introduction of Romanesque architecture. Some of the best examples of this can be seen in churches at Dysert O’Dea, Corofin and St. Flannan’s Killaloe. This style also spread to the highly decorated high stone crosses, which can be seen throughout the county.

The pinnacle of Irish mediaeval architecture must be the round towers which were constructed, at this time, to protect church valuables from the Vikings and other plunderers. Six examples survive in County Clare, the best probably being the round towers on the islands of Inis Cathaigh (Scattery) and Inis Cealtra near Mountshannon. Some of these stand like stone pencils being over one hundred feet high on a twenty foot base and have not needed repairs for over a thousand years.

The late middle ages brought a period of peace and prosperity to County Clare, which allowed wealthy landowners and clans to contribute to the building of numerous abbeys and convents. Orders such as the Franciscans, Augustinians and Cistercians were invited to build and serve local communities, through education, religious instruction and hospitality. Some of the finest monastic complexes in Ireland can be seen at Quin, Ennis and Corcomroe in the Burren.

The fashion of building tall, narrow tower houses also became popular, at this period, among the strong farmers of County Clare. The skills learned and employed building the abbeys were now used to build four storey, fortified farm houses, leaving over two hundred and thirty examples in the county, many of which are restored and once again inhabited.

After the Williamite Wars at the end of the 17th century, most of the Gaelic nobility emigrated to the continent leaving the new landlords free to build unfortified, gracious, country houses, many of which survive to this day. Their use of natural building materials such as stone, lime, slate and wood allow them to blend attractively into the landscape. Most of our towns and villages also date from this period and through the adoption of many architectural conservation areas in County Clare, it is hoped that the 18th and 19th century character and integrity of these delightful settlements will be restored in the future.

These centuries also saw the building of thousands of thatched vernacular, single and two storey cottages throughout the county. In areas where natural slate was easily available such buildings were covered with Killaloe, Broadford or Liscannor slate, materials which are now becoming increasingly rare and worthy of protection.

However, the modern era must also be permitted to leave its mark and it is hoped that new structures will also serve to enhance the landscape by the use of innovative design, sustainable materials and appropriate siting. Initiatives such as the Clare conservation and design awards and the County Clare house design guides should raise an awareness among the public of the value of good design and use of appropriate siting and materials.

It is important that the structures built in the present era, will be seen by future generations as having contributed to the amenity, integrity and enhancement of our urban and rural landscapes, in the same way as many of the buildings of the past.